The Species at Risk Act defines “wildlife species” as “a species, subspecies, variety or geographically or genetically distinct population…”. This definition gives COSEWIC a mandate to assess units within a recognized taxonomic species. COSEWIC recognizes a unit below the level of a recognized taxonomic species as a DU (i.e., as a “wildlife species”) if it has attributes that make it both "discrete" and "evolutionarily significant.

Approach to the identification of DUs for status assessment:

A DU is a unit of Canadian biodiversity that is discrete and evolutionarily significant, where discrete means that there is currently very little transmission of heritable (cultural or genetic) information from other such units, and evolutionarily significant means that the unit harbours heritable adaptive traits or an evolutionary history not found elsewhere in Canada. For example, it may be possible for individuals from the same taxonomic species to move (or be moved) into an area formerly occupied by the lost unit, but these individuals and their descendants would belong to the DU from which they originated until they became eligible for assessment as a new, independent DU.

Guidelines for the identification of DUs:

A named subspecies or variety identified in accordance with COSEWIC’s guidelines for naming subspecies and varieties should be recognized as a DU if it meets the criteria for both Discreteness and Significance.

COSEWIC recognizes a DU (i.e., recognizes a unit below the level of a taxonomic species as a “wildlife species”) if it has attributes that make it both "discrete" and "evolutionarily significant."

A putative DU may be considered discrete based on one or both of the following criteria (Figure 1), each of which indicate little or no transmission of heritable information between it and other DUs:

D2. Natural (i.e., not the product of human disturbance) geographic disjunction between putative DUs such that transmission of information (e.g., individuals, seeds, gametes) between these "range portions" has been severely limited for an extended time and is not likely in the foreseeable future. “Extended time” is intended to mean that sufficient time has passed that either natural selection or genetic drift are likely to have produced discrete units, given the specific biology of the taxon.

If a putative DU is found to be discrete, its significance can be assessed (Figure 1). A DU is considered significant based on one or more of the following criteria. These criteria capture two types of significance that can operate together or separately: (i) an evolutionarily significant period of isolation that is expected to generate an evolutionary history that cannot be reasonably expected to be practically reconstituted (criterion 1); and/or (ii) the presence of specific adaptive, heritable traits (phenotype) that may develop in a shorter time-frame but that nevertheless cannot be reasonably expected to be reconstituted (criterion 2).

S1. Direct evidence or strong inference that the putative DU has been on an independent evolutionary trajectory for an evolutionarily significant period, usually intraspecific phylogenetic divergence indicating origins in separate Pleistocene refugia.

S2. Direct evidence or strong inference that can be used to infer that the putative DU possesses adaptive, heritable traits, that cannot be practically reconstituted if lost. For example, persistence of the discrete, putative DU in an ecological setting where a selective regime is likely to have given rise to DU-wide local adaptations that could not be reconstituted. See Practical Considerations/Best Practices.

The Discreteness and Significance Guidelines described above are the principles that form the basis for DU delineation. The practical considerations and best practices described below provide guidelines for report writers and reviewers. These practical considerations and best practices constitute a living document that COSEWIC will update as needed.

Table 1. Example of how to summarize pairwise differences between putative DUs. The goal is to provide all the information available, including evidence that would support the putative DUs, and available evidence that might not support the proposed DU structure. In the case of genetic data, the table would ideally distinguish between evidence from neutral genetic markers (that might support discreteness between DUs), and functional markers (that can inform evolutionary significance). This example provides some examples of evidence that might inform DU recognition. It is not intended to be exhaustive, recognizing that the available evidence and the relevant types of evidence will vary among taxa.

Reconstitute: To replace a lost DU by individuals that would be identified as belonging to the same DU. That is, the individuals would have the same heritable adaptive traits or hallmarks of the same evolutionary history as those they are replacing. 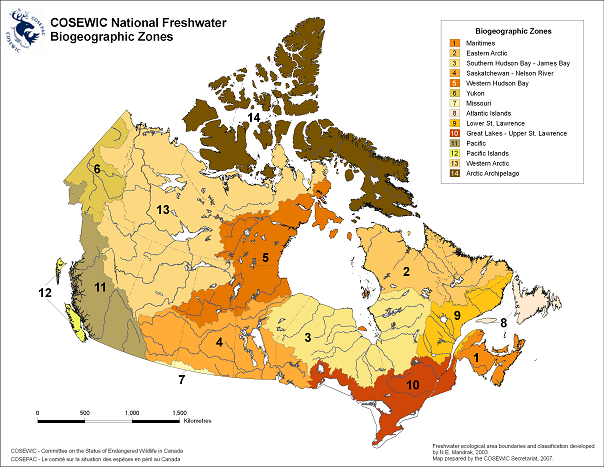 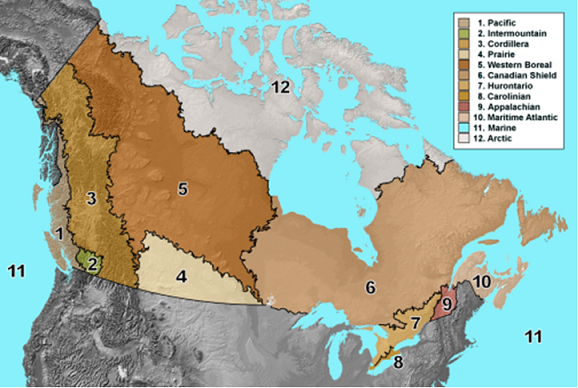 Archived Figure 4. COSEWIC Terrestrial Amphibians and Reptiles Faunal Provinces in use since at least 2007. See the Amphibian and Reptile Faunal Provinces of Canada report to COSEWIC (dated March 2016), which was part of the November 2016 discussion, for differences between this map and the current map.